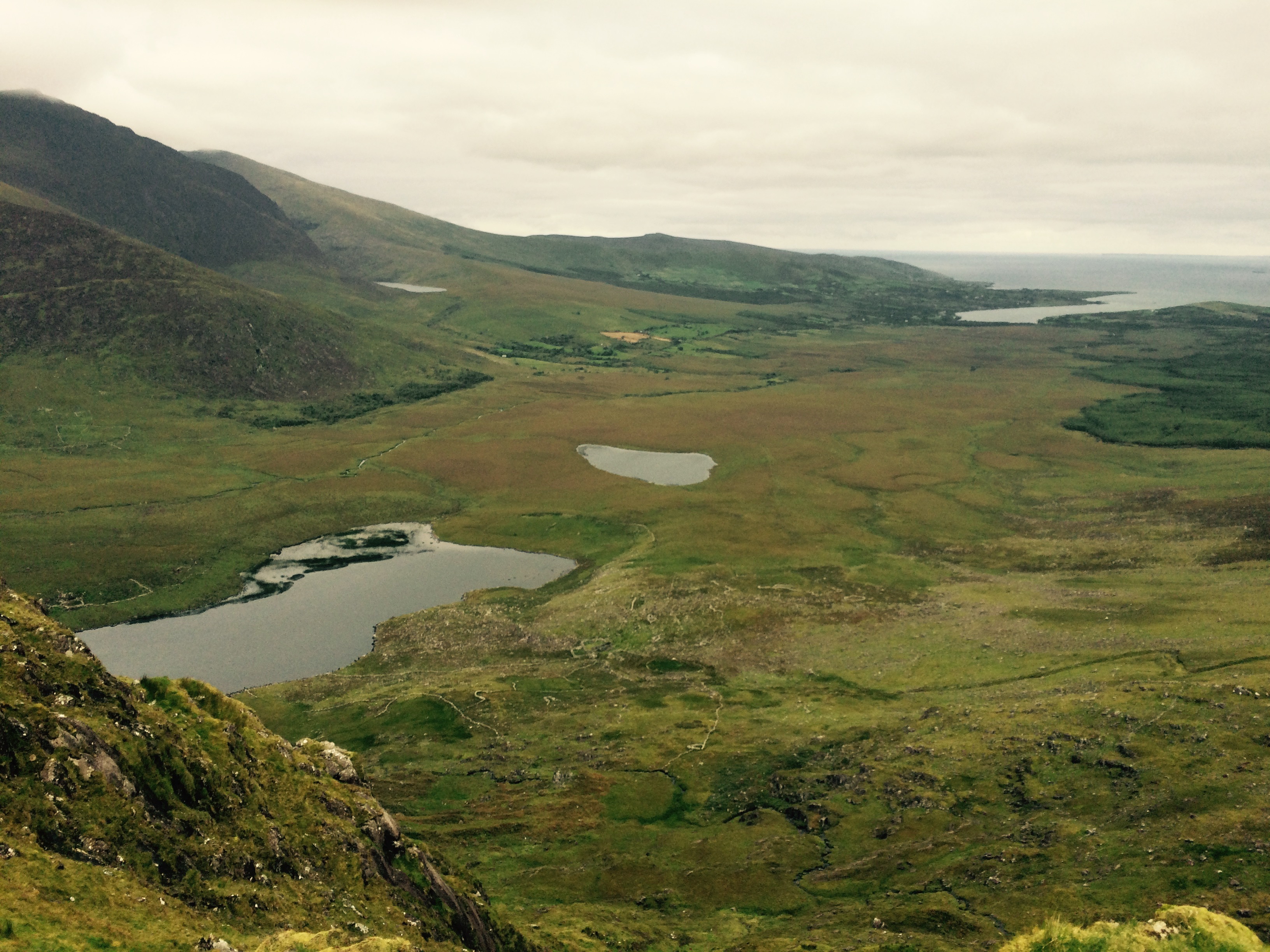 Donnacha and Dave from Kerry Cycling  are back with an informative summary of the climbs you will encounter on the Ride Dingle route and how to get over them, there’s nothing to fear folks!

It’s quite a challenge to find an enjoyable cycle in County Kerry that is pan flat and that’s a good thing. Most cyclists that we know seem to relish the challenge of a gradient with some preferring the uphill struggle and others enjoying the rush and relief of a good downhill stretch of road. There lies plenty of options for both as part of the Ride Dingle 55km and 120km routes.

Elevation of the 55km route

The 55km Ride Dingle route around Slea Head is what some would describe as lumpy in places, with a rolling terrain for the first half of this scenic route and the latter half includes 2 category 5 climbs of approximately 3km in length each with an average gradient of 3% between them. But in our opinion, it is the captivating coastal scenery and fresh Atlantic air around Slea Head that stands out more than any specific climb.

Elevation of the 120km route

It is after the first 55km around Slea Head is completed that the real climbing begins. The 120km Ride Dingle route as you can see from the elevation graph above contains one obvious mountainous obstacle in the middle, the Conor Pass, which starts just after leaving Dingle with roughly 56km completed. The last remaining notable hurdle of Gleann na Gealt then remains after the last food stop at Camp with about 88km in the legs. For those not familiar with the terrain the advice is to keep a small bit of energy in reserve when climbing the Conor Pass as you will thank yourself later in the day. 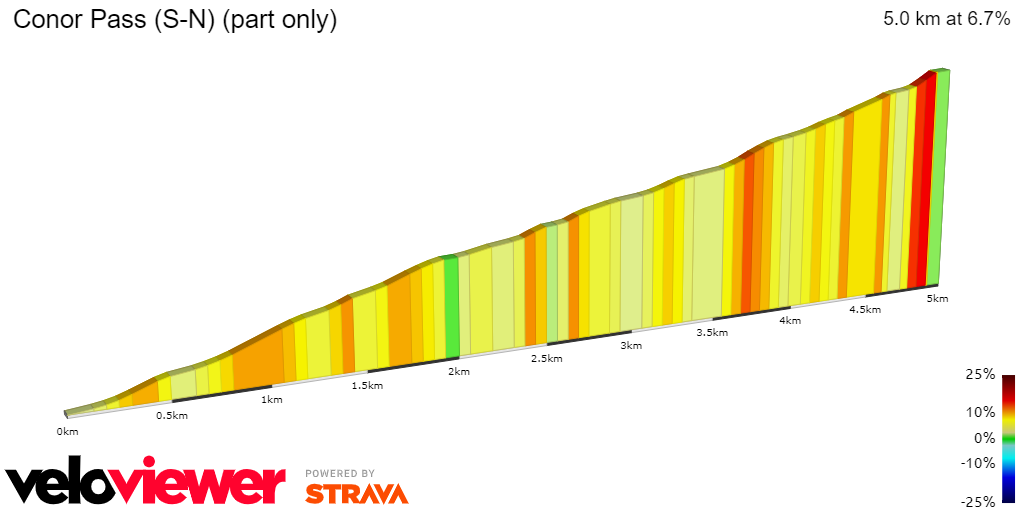 The Conor Pass located just to the North East of Dingle is Ireland’s Highest Mountain pass and it well earns its reputation for being a tough climb to cycle. Immediately as the cycle leaves Dingle the looming hills in the foreground will be obvious as the gradient gradually begins to increase after the first kilometer or so where the climb takes hold as the road begins to gradually widen. This first half of this climb generally has sections of between 5 and 10% with some harder sections of up to 15% occurring near the summit on the second half. From experience this climb however is the easier approach than the other side of the Conor Pass and it is quite possible to settle into a rhythm with an appropriate gear. Don’t forget to take a minute to rest, refuel and enjoy the scenery at the top of the Pass. On a clear day the views over the Maherees, Tralee Bay and ever farther afield are breathtaking. 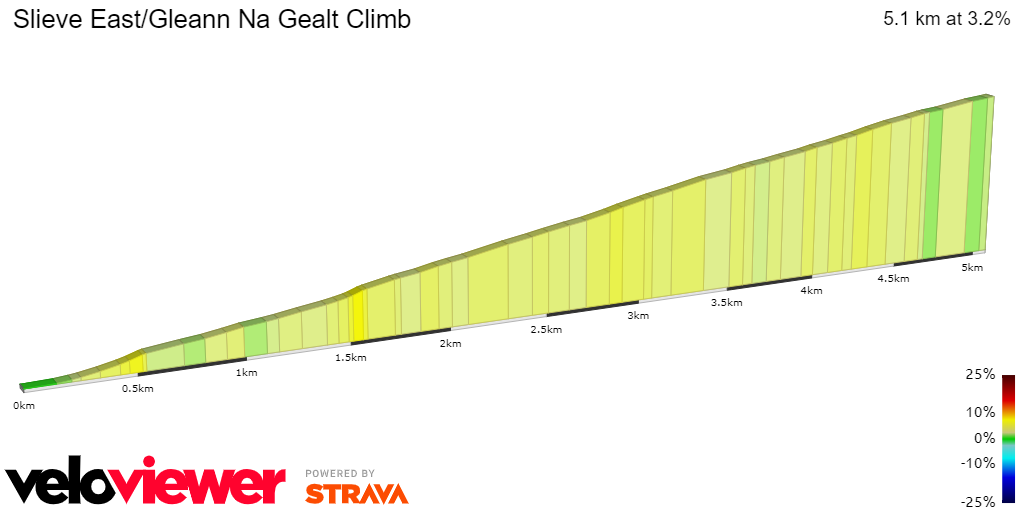 Gleann na Gealt with a name in English aptly meaning Glen of the Mad is the last notable climb of the day. With a similar distance to the Conor Pass it has much less in the way of gradient and elevation, however it is the accumulation of distance, rolling terrain and elevation already cycled that could make this a hard climb for those who have not left a little in the tank to ensure they can cycle this with relative comfort. The first half of this climb is difficult to settle into in our opinion, the open road and quick rise in gradient after leaving Camp leaves you in no doubt that your body is working hard. It is after about 2.5km into the climb where the road takes a sharp left hand 90 degree turn that the summit comes into view and while it might look far away the road seems to become more lively and easier to traverse and progress. You will be at the summit in no time. 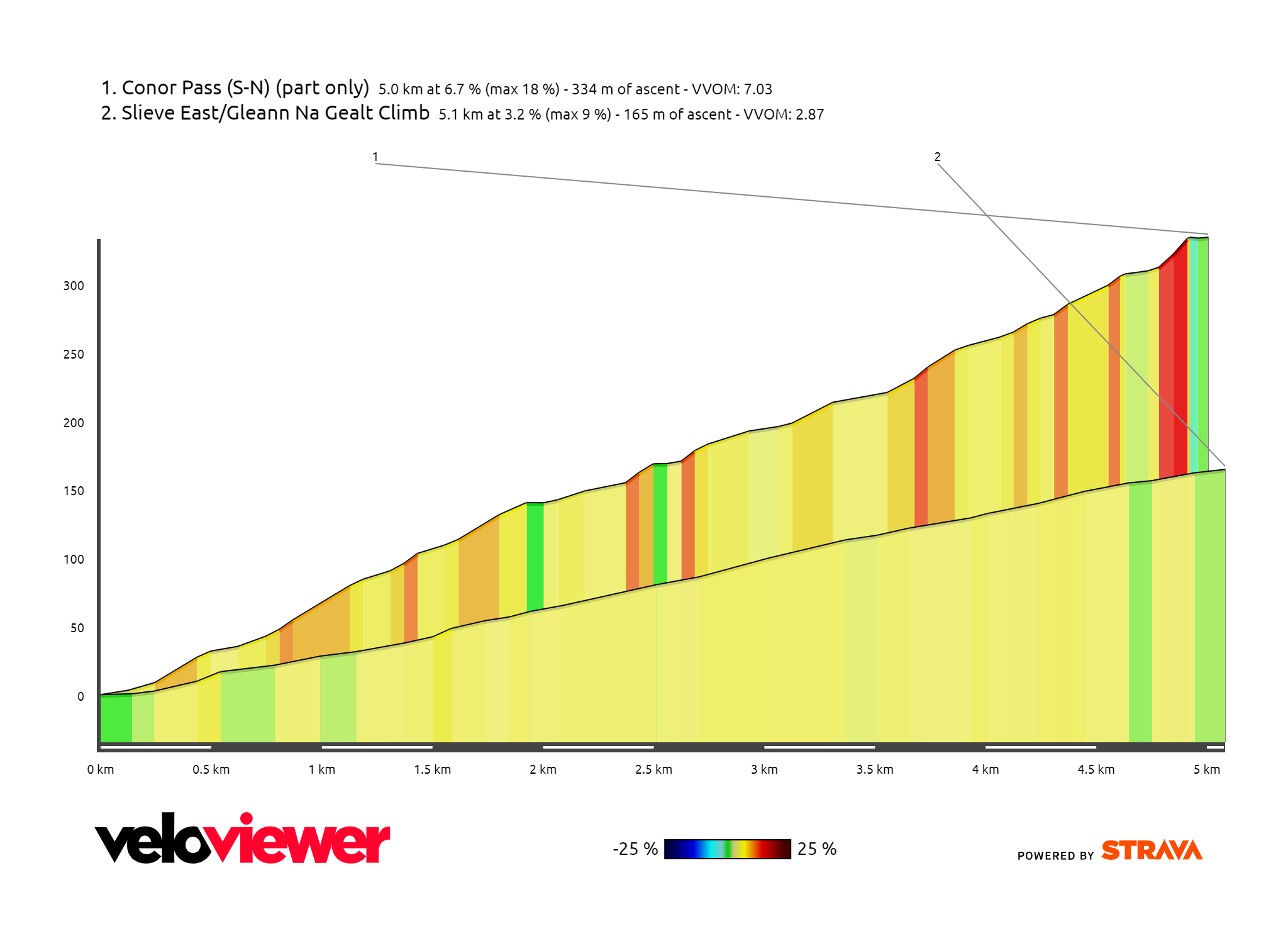 This image shows the difference between the two main climbs of the day, with the Gleann na Gealt looking like much less of a challenge to climb. But remember it will only feel so if you have saved a little energy on the day for it. After the rolling terrain of Slea Head and the hard challenge of the climbing the Conor Pass legs will inevitably be tired!

Cycling – a pain in the neck, back and bottom – Part One

The four top challenges you will face at Ride Dingle