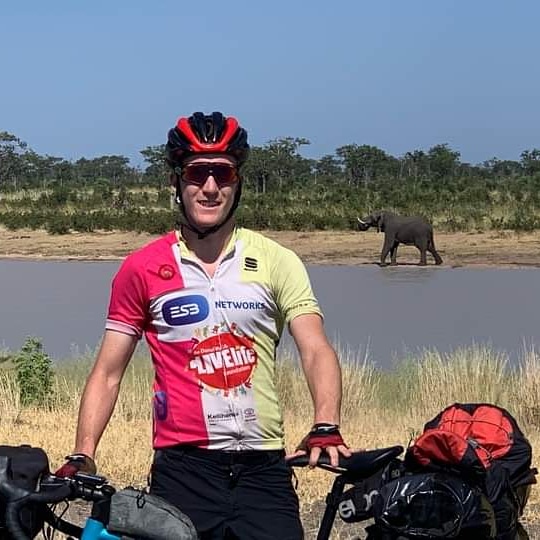 We caught up recently with cycling guru and Ballyferriter native Tomás Mac an t-Saoir about all things Dingle, cycling and Africa….

Why is Dingle such a great place to cycle?

The Dingle Peninsula is a brilliant place to cycle due to the sheer abundance of beauty on show. Head east from Dingle town via the Killarney Road and you end up at the stunning Inch beach known for its surfing and picturesque views or else you can head to Annascaul village.  Head west from Dingle and you’ll find yourself lost in the beauty of the famous Slea head drive. If you fancy climbing Ireland’s highest mountain pass, then take the Conor Pass road out of town. It’s a savage 6.5 km slog to the top with the gradient averaging 7%. Ouch!

Slea Head. I didn’t even have to think about that one. Easily one of the most amazing places I’ve ever cycled. Slea Head is a 53 km loop that takes you through the Gaeltacht, west of Dingle. Being 53km it isn’t a long cycle, but it’s a nice rolling terrain type of ride, taking in some spectacular West Kerry scenery. The highlight is pedalling on the coast road section before Dunquin village with the Blasket Islands in full view.

How did the idea to cycle the length of Africa come about?

Returning home from my USA cycle in 2016, I found myself heading back to university to study and become a school teacher. However, there was a burning desire in me to go travelling again. America wasn’t enough. I needed something bigger, something better, something dangerous that would put my life at risk, something that would take me out of my comfort zone, something that could potentially crack me but something that would add years to my life if I could pull it off. I decided against college and instead looked at a map of the world. Africa immediately jumped out at me. I couldn’t settle on cycling around a couple of countries. Nope, that wouldn’t be good enough for me. If I was going to cycle in Africa, then I was going to cycle all of it. I was going to cycle from the top of Africa (Egypt) to the bottom (South Africa). I wouldn’t settle for anything less. It was the whole damn thing or nothing at all. I knew Africa would be a gigantic challenge that would test me in every way possible. At this stage in my life, everything was set up for Africa – I was 24, careless, adventurous, in need of something crazy and had no huge commitments like a mortgage, full-time job, wife, kids etc. Who knows what sort of life I will have when I’m older? I needed to do it now, something that would hopefully benefit me for the rest of my life. I also have a number one life rule – the most important being no regrets. I knew if I let this chance go by, I would regret it for the rest of my life and that would be something that would eat into me every day. The ‘what if’s’. I don’t want these ‘what if’s’ to plague me throughout my life. Africa was a moment of now or never, no time for waiting. It was something that would challenge me and take me outside of my comfort like nothing I had done before.

How long did the trip take you, time and distance and what route did you take, support team?

Cycling Africa from top to bottom took 7 months. It was around 11,000km from Egypt to South Africa. I stuck to East Africa, and then when I entered Botswana I travelled west to Namibia before finishing in the south-west of South Africa in Cape Town. The route from Cairo to Cape Town is the main route cycle tourers take when cycling the length of Africa as there are some countries you need to avoid/would be denied entry into such as Libya, Somalia, The Congo etc. You’re fairly restricted with your route planning – you stick to the safest route.  I had no support, i.e. no support vehicle etc. I was totally unsupported – everything I needed was on my bicycle. All my gear was packed away in my pannier bags. I didn’t need much to be honest, some clothes, spare bicycle shorts, camping gear and tent, electronics, solar panel, bike lock, GPS, spare bike parts, a medical bag just in case, and a few other bits and bobs.

What level of training did you have to put in to prepare for the trip?

There was no specific training. I just got out on my bike whenever I could, but usually, the build-up to these tours is dominated by work and saving money. The great thing with bicycle touring is you can just jump on a bike and take off. That’s the beauty of it. Your training is the first few weeks of the tour and once beyond that then you’re flying fit.

Tomás Mac an t-Saoir was educated in Ballyferriter and Dingle before graduating from NUIG in 2016 with a degree in Irish and History. Since 2016 he pursued a different type of education and cycled 5000km across American and followed that trip with an 11,000km cycle down the length of Africa in 2018/2019. Tomás is currently planning his biggest cycle tour to date in January 2020 when he plans on cycling home from New Zealand. In between these trips he is usually found at home working in his family pub (Tigh an t-Saorsaigh) in Ballyferriter, or else around the roads of Kerry working as a cycle tour guide with his uncle’s company, Green Road Cycle Tours.

Ride Dingle takes place on Saturday, April 25th 2020.  You can register for the event here

6 Signs You Love Your Bike More Than Your Partner

6 top tips for the novice cyclist