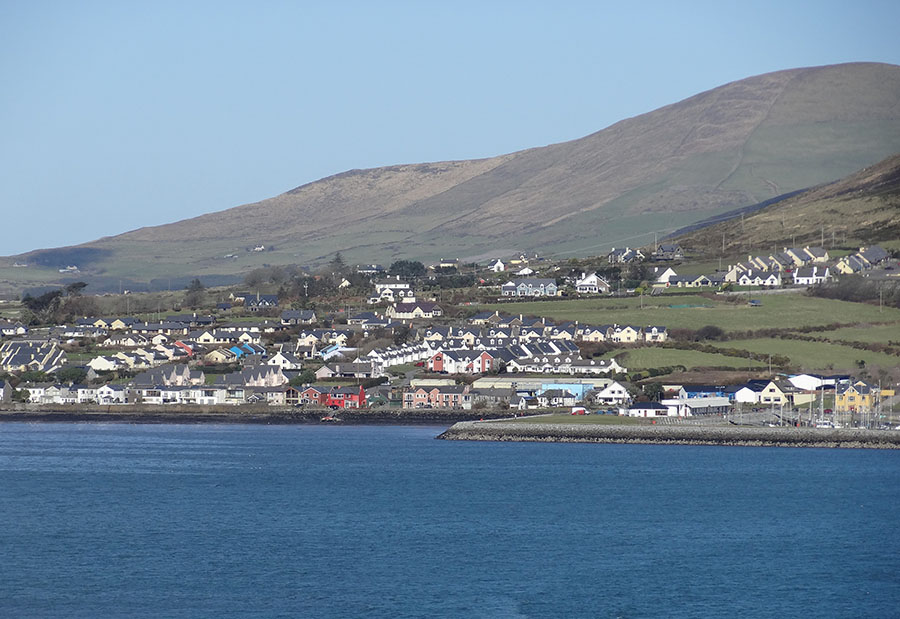 Donnacha and Dave from Kerry Cycling recently took to the Dingle Peninsula on the bikes, here’s their take on everything you need to know about the 55Km and 120KM routes…

If you had three words to describe the Ride Dingle routes, they could well be: unforgettable, scenic and challenging. Here are some practical details and a guide to both routes that should see you armed with enough knowledge to navigate and enjoy your way around safely and bring you back to Dingle with tired legs and a rejuvenated spirit.

Sign on and Event Headquarters is located at the Pobailscoil Chorca Dhuibhne in Dingle town. The 55km and 120km routes both begin by heading west from Dingle following signposts for Slea Head along the R559 road. After leaving Dingle the first few kilometres are shrouded a little in secrecy behind trees and hedgerows before the breath-taking Atlantic Scenery opens up into full 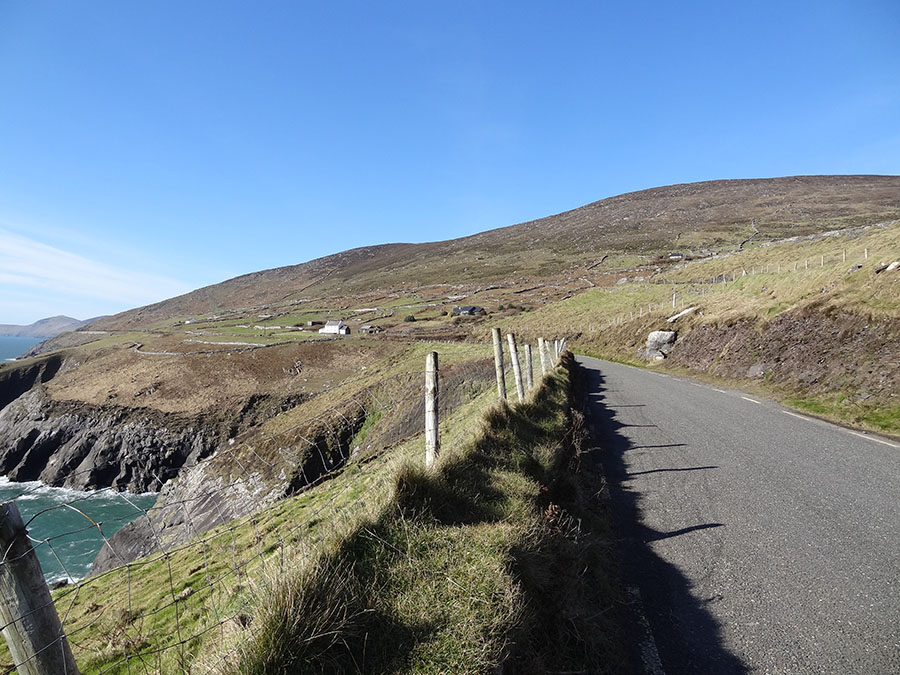 view near Ventry after 6 km. Beyond Ventry, the route takes you alongside the most western edge of Ireland and arguably one of the visual highlights of the whole cycle, as you pedal alongside the Atlantic Coastline on an elevated cliff top road. Take some time here to enjoy the ruggedness of the area, with panoramic sea views of the Skellig and Blasket Islands, seagulls a plenty and cattle and sheep grazing sleepily on the surrounding slopes and ridges.

Continue cycling along the R559 road towards Dún Chaoin and Coumeenoole Beach as the route cuts inland slightly before emerging onto views of the Three Sisters and Clogher Strand, before reaching the quaint village of Ballyferriter after 28km for the first food stop of the day. 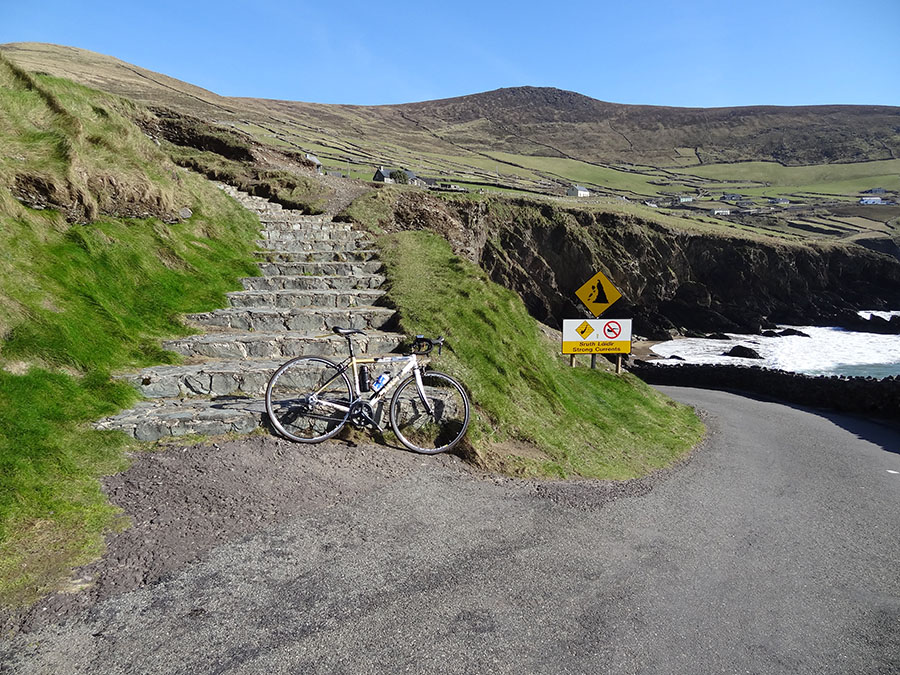 R549 and Murreagh (An Mhuirioch). Keep on the R549 for the remainder of the cycle back to Dingle. This stretch of road is steeped in history and runs close to Gallarus Oratory. Beyond here this section of the route reaches its most northerly point at Feohanagh before turning in on itself and back to Dingle. Most of the terrain up to this point has been rolling with a category 5 climb now beginning after 43km in the legs. This final approach offers a steady climb plus the closest section of the 120km route to Mount Brandon. The climb is roughly 3 km long and is worth the effort to the summit. The reward is a pacey descent back to the Pobailscoil Chorca Dhuibhne in Dingle for the main food stop of the day with 55km in the legs.

Those that signed up for the 55km are finished with cycling for the day. An hour or so lingering around Dingle is recommended to savour a job well done.

On leaving Dingle for a second time of the day the route takes a left turn and leads along the R560 and onto the start of the longest climb towards the peak of the Conor Pass. The climb looms large from Dingle town and is challenging but steady with the last 5km of the climb averaging 7% gradient. The rewards however at the summit are impressive on a clear day. A stark contrast to the adjacent coast alongside Slea Head earlier in the day where now you are high with abundant views looking eastwards towards The Maharees, Tralee Bay and beyond. 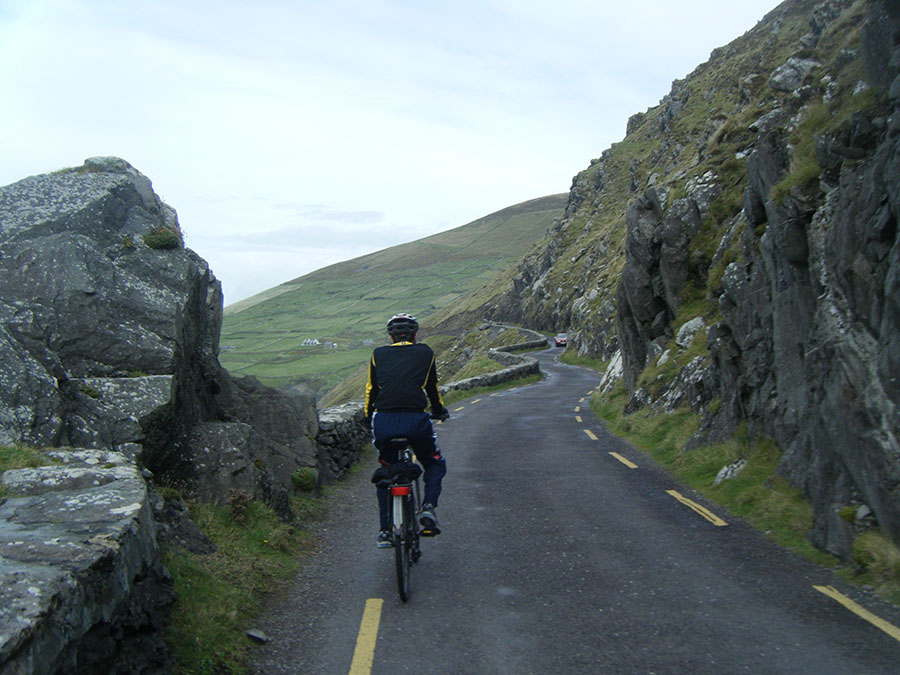 The descent is an exciting rush and an opportunity to freewheel, gliding on the road which is hugged by the rock face as far Pedlars Lake, before opening out to a wider expanse as the second half of the descent reaches the townland of Ballyhoneen. From here the R560 meanders on a mostly flat surface as the cycle moves in an easterly direction towards the coast as you pedal between the Dingle Peninsula Mountainside to your right and the wild Atlantic Ocean to your left before reaching the next food stop in Camp village with 88km in the legs.

After a well-earned break the hill into Upper Camp is short but testing. A right turn at the top brings you into the village and the N86 for the start of the steady climb up Gleann na Gealt. For the next 5km the road rises steadily with fine views of Brandon and the Maherees below to the right. The climb is a lesser challenge than the Conor Pass, but no doubt legs will be tired at this stage. At the top keep an eye out for the remains of the Gleann na Gealt station, which was part of the old Tralee to Dingle railway.

The next section is a 10km steady descent into Annascaul. The first section is the steepest and fastest with the rest of the route throwing in a few twists and turns through the farmlands of west Kerry. Caution is advised cycling into and through Annascaul village as the road deteriorates slightly after a speedy descent.

From Annascaul to Lispole (9km) be prepared for a few minor up’s and downs as well as 2 technical hairpin bends. Closing in on Lispole the road has been upgraded significantly and makes for a smooth yet hilly ride. Once clear of Lispole and still on the N86 you are on the final stretch. Here the road is initially long, straight and flat. Once past the old Seal Sanctuary the road rises, kicks and curves. The views of Dingle harbour and the Eask Tower come into view as you pass Dingle racecourse. The final kilometre or so is a welcome downhill section as you enter Dingle town and head back to event HQ to complete a most memorable day on two wheels.

KerryCycling.com is bought to you by Donnacha Clifford and David Elton, authors of Kerry Cycling: Great Road Routes and passionate leisure cyclists based in Co. Kerry, Ireland.

7 Signs You Love Your Bike More Than Your Partner